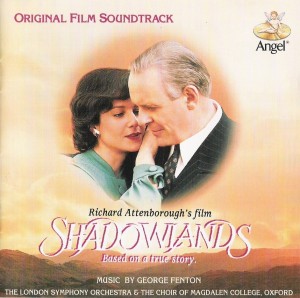 “In many ways, Shadowlands was a sort of a homecoming for me,” Fenton said in a recent phone interview, “because I learned my music as a boy in church. And I studied the organ, so I’m quite familiar with church music. And I went to school in Oxford. So the world of Shadowlands—so many of the places, and the way that people were—was familiar to me, in a quite nostalgic way.”

“[Attenborough] wanted me to write a truly English score,” he says, “to write in the style of George Butterworth, or even Elgar, in that English sense of harmony. And of course it’s so in my background, along with church music, that it was a very special thing for me to do. All the time I was doing it I knew it was special.”

Fenton’s contributions to Shadowlands started before production even began. “[Attenborough] always said, ‘I don’t understand why people are brought on at the end,’” the composer says. “I think actually there’s very good reasons for us to come on at the end, usually, because all the film’s to-ings and fro-ings, and the things that didn’t work out quite the way people thought…when you come onto a film to do the music you’re never aware of them, really. You just see the film, and there it is.”

His early involvement was required in this case, though, because he needed to write the choral anthem sung on-screen at the beginning of the film. Nine months before sitting down to compose the score proper, Fenton penned the piece “Veni Sancte Spiritus,” which he recorded with Oxford’s Magdalen Choir. (C.S. Lewis taught at Magdalen College and attended evensongs in the same hall where the piece was recorded and the scene filmed. Such poetic shadows make the film all the more meaningful.)

One of the advantages of coming on early like that, Fenton says, “was that the thematic material within the choral piece became part of the fabric of the score. I had time to digest it. [Attenborough] was very specific about it. He said, ‘It would be great if it started with a solo male voice, and ended with a solo boy.’ I said, ‘What [text] should I set?’ He said, ‘It doesn’t matter. You set whatever you like, but it would be great if you could do that.’ He described how he wanted to move the camera, and of course the metaphor in that opening anthem of the man and the boy. He was very clear, and very helpful in that way.”

Fenton selected the Latin text (a mass sequence for Pentecost, which translates to “Come Holy Spirit”) primarily because “it was a good economical length, and the shape’s good. I could imagine the opening words with one voice. You kind of happen on these things, in a way, and you’re not quite sure why you’re drawn to something.”

“The [recording] was done in the chapel, which has a fantastic acoustic,” he says. “We took a mobile recording rig up there, and recorded them in situ. The place sounds wonderful. The authenticity of it was fantastic, but on top of that the musicality of the choir is just incredible. Even the kids—some of them were only eight—they’re just like professional musicians. You just put the music in front of them and they sing it. It’s quite an extraordinary tradition, and I really, really enjoyed that. We had a lot of fun, and of course the college embraced the film to such an extent. It was a happy time.”

In its initial, choral form, the theme sounds very much like it belongs in a church. Fenton layers voices on top of the first solo voice in a contrapuntal way befitting sacred music. When the solo boy’s voice enters (after a swell of choral and organ majesty), it becomes personal and intimate, and it’s this feeling that Fenton weaves into the rest of the score (developing it in and around the love theme).

The choral anthem plants the seed of the metaphor for one of the film’s major literary and musical themes, the idea of “as a boy and as a man.” “I think the music the treble boy soprano sings at the end of the film, when Joy’s died and Lewis is with the boy, is so specific that you do recognize it is, in some way, the boy’s voice you’re hearing,” he explains. “It’s the idea of [Lewis] entrusting the future to the boy, and the fact that he, completely unqualified, became this father figure for the boy.”

“I also think the vocal music, in a way that distinguishes itself from orchestral music, alludes to Lewis’ storytelling—and the boy and the wardrobe and the attic and all of that. I think because the voice has a given spirituality it gives a slightly more fantastical, magical quality. So that at the end of the picture, when we hear the voice singing, it isn’t just a reprise of the anthem from the front, but it’s somehow to do with what they discovered when they spoke to each other in the attic.”

As a Boy and As a Man

For the climactic, searing rendition of this theme—in the above cue (“As a Boy and as a Man”), which requires a good pair of speakers and a box of tissues—the boy soprano has to hit a high B-flat. “I tried to get it lower so that it would just be an A-flat,” Fenton says, “but I couldn’t figure it out or make the modulation any good. So in the end I thought, ‘I’ll just have to do it, and anyway it’s not that high.’ I said, ‘Can anyone sing this note?’ and they said, ‘No, nobody’s got a good top B-flat.’ So Fenton searched and found a boy from a South London choir who could handle the formidable note. The result is perfectly heartbreaking.