It all began with a cassette of the Jurassic Park score playing in my aunt’s minivan. 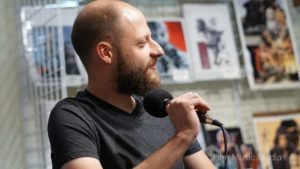 Ever since I was a prematurely-bespectacled man cub, I’ve been obsessed with film music. It started as a John Williams obsession, and gradually swallowed up the whole genre. After years of making film score mixtapes, air conducting to The Empire Strikes Back in the family van, and explaining what “film music” was to the perplexed laypeople in my life, I’m now a film music journalist in L.A…. doing basically the same things for a living.

I produce radio features for NPR, Classical KUSC, and KPCC’s The Frame, and contribute to the Los Angeles Times and the Washington Post. My work has been published in the New York Times, Variety, The Ringer, Los Angeles Magazine, and Vulture. I’ve written program notes for the Los Angeles Philharmonic, the Royal Albert Hall, and the Walt Disney Company, and liner notes for more than one hundred soundtrack albums from Intrada, Varèse Sarabande, and La-La Land Records. I have also contributed to the Visual History Program for the Academy, and I teach film music history at USC.

projector & orchestra is where I write about whatever I want on the topic I’m still obsessed with (to an unhealthy degree, if you ask my wife). Essays on new scores and old, trends in the art form, film reviews, and score anniversary interviews. Visit my official site if you’re interested in seeing my published (big boy) work. Thanks for reading!