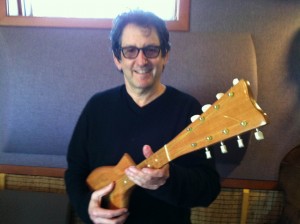 Schwartz was involved in music as a bass player, engineer, and producer for a long time—though never a writer—before falling into a career-launching gig as composer for the CBS series, Northern Exposure. For six seasons (1990–1995) Schwartz wrote an ever-growing variety of music—both original underscore and source songs for the bar jukebox and DJ—assuming every conceivable genre. “It felt like I was going to school every day,” he says of the first-time experience. The show achieved enormous critical and popular success, winning multiple Golden Globes and Emmys during its run.

A few years later Schwartz got a phone call, out of the blue, from Mitch Hurwitz, who had just been named showrunner of the The John Larroquette Show (already mid-series) and wanted someone new for the music. Hurwitz said: “They showed me a bunch of composers’ stuff, but I didn’t really relate to it. I was in a storage closet here at Witt/Thomas and saw a cassette with your name on it. I really like it—can you come over here today?”

Schwartz landed that job, setting in motion a rewarding collaboration that continued with Hurwitz’s next show, Everything’s Relative (“a real precursor to Arrested Development,” he says, with Jeffrey Tambor playing the father), which only lasted four episodes, and then The Ellen Show. Arrested was an idea cooking in Hurwitz’s head for some time, with several connections to his own family (“which is always good and bad for him,” Schwartz laughs).

“When I saw the first episode,” says the composer, “and I saw Michael Cera with that first line—‘What do we always say is most important?’ ‘Breakfast?’ ‘No, family’—that to me was a family. They’re all fantastic actors, but there’s a certain realness to the family whenever you have Michael on screen, whatever his underplayed comedy is. It was really amazing.”

Getting the main title right was the key to the palette and personality of the score. Schwartz tried several ideas on Hurwitz, who liked but rejected them (they would all be incorporated into the score later in some fashion). “And he was right,” says Schwartz. “None of them were different or iconic enough to be the main title.” On a vacation with his wife to the French Polynesian island of Bora Bora, Schwartz heard a Tahitian ukulele for the first time in the hotel lounge. “It sounded like a psychedelic banjo,” he says, “and it looked like an electric guitar. The sound hole is on the back of the instrument, so you can’t see it, and I couldn’t figure out where all the volume was coming from.”

Schwartz asked about buying one of the instruments, and was finally able to do so on the last day of his vacation (after a couple false starts, the player located this exceptional ukelele at the luthier’s abode on the far side of Bora Bora). “I brought it back and knew it was something,” he says, “but I didn’t know what.” The first thing he came up with was the one-second logo for the Hurwitz Company that plays at the end of every episode. Hurwitz loved it so much that Schwartz proceeded to write the main title around it, creating the familiar ukulele-and-whistling swing number that plays under the opening credits (inseparable from Ron Howard’s narration).

“These things come together in ways you really can’t understand,” Schwartz says. “It just seemed to be the sound of the show.”

A lot of the underscore is derived from that central idea of ukulele swing music, providing the Bluth family with a quirky, breezy, and slightly retro signature. But Schwartz has dabbled in almost every genre to match the widely scattered comedy—whether accompanying the Bluths’ exploits in Mexico, Tobias’ dreams of being a Blue Man, GOB’s intensity as a magician, Buster’s service in the Army, or political espionage in Wee Britain. “So much of the music is not pure score,” says Schwartz, “where I’m just trying to come up with a sound that’s out of the way. So much of it could exist as a record—as a Hot Club of France, or Duke Ellington, or Aretha Franklin record. Genres are recognizable and funny within themselves.”

Schwartz clearly has a sharp comic sensibility, but he doesn’t set out to be funny. “In every show I do,” he says, “and I probably drive my engineers crazy, is I always have the dialogue on (unless we’re just trying to fine-tune something). To me the dialogue is like the melody. If you had a band, the dialogue would be the singer. We’re all working to support that, so writing great music is secondary. I don’t ever think, ‘Oh boy, let’s write this funny note,’ or ‘Let’s make this funny.’ But I do always try and make things fun.”

The score often contributes its own joke by treating a moment with utter sobriety (with the show essentially becoming self-aware and making fun of itself). Favorite examples are the tender piano theme that plays when GOB and Michael reconnect, the exotic duduk motif attached to George Sr.’s conversion to Judaism (and later Christianity), and the soapy piano motif that hovers around Oscar’s “Pop Secret” whenever Buster mentions his father.

As it is Written

These cues become recurring gags, and by referencing cliché sitcom or soap opera tropes, or taking seriously the absurd seriousness or delusions of characters, they provoke their own, well-deserved laughs. “For every episode there’s more new, original music than almost any half-hour show I’ve ever been associated with,” says Schwartz. “That being said, we’ll get to a point like, ‘We’re going down this Jewish road again,’ and we’ll play the ancient duduk thing. Sometimes it made sense to redo it with different notes, and sometimes it made sense to use it as a joke again. The “Oscar’s not my father theme” we did once, and it was just so funny to us when we did it. I think there was even a network note at the time that said, ‘This is too serious’…so we made it even more serious every time we did it.”

Another big contribution to the show has been the dozens of original songs, which Schwartz mostly co-wrote with Gabriel Mann (his former assistant, and now composer of Modern Family). Again drawing on the humor of genres, they cranked out parodies for the show as needed, sometimes writing two or three songs a night. From the ’80s power ballad “Balls in the Air,” to the folksy “Big Yellow Joint,” to the 007-esque “For British Eyes Only,” Schwartz churns out just enough of a song to fit the scene and (usually) no more. “I get a lot of emails about these songs asking for the full version,” he says. “But that’s it. It took us an hour and we wrote a minute and three second’s worth, because it was 2 in the morning and we had another song to write. Writing two more verses and a bridge wasn’t going to happen.”

Balls in the Air

Sometimes Hurwitz would suggest or write song lyrics, especially when the script demanded something specific—the ultimate example being GOB and (puppet) Franklin’s duet, “It Ain’t Easy Being White.” “We were thinking about those big Bryan Adams film songs,” Schwartz says, “and writing around that kind of feeling. It was just so over the top, and that could have been offensive…but who could dislike Franklin? It’s such a ridiculous concept, and then Will [Arnett] took it and added his own wonderful, just-go-for-it, comic intensity.”

Many Arrested songs were sung by Mann, some by Schwartz, and several by Schwartz’s (at the time) 14-year-old daughter, Lucy—the voice of “Mr. F” and “For British Eyes Only,” and now a successful singer/songwriter herself.

As much as possible Schwartz uses live instruments, although budget and time constraints don’t always allow for it (strings are always sampled). He’s played everything on the scores from bass, flute, harmonica, and guitar himself, and has relied largely on film and TV guitar legend George Doering (“the greatest scoring musician of our time”) to breathe life and humor into the music. “After twenty years of working with George,” he says, “I’m always amazed at how good he is. He’s a scoring machine. There are other fantastic guitarists, but George just immediately gets what’s on the screen, and how he can add to that.” (It’s Doering playing the main title on the Tahitian ukulele. 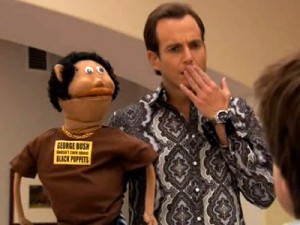 Schwartz credits the genius of Hurwitz and their special partnership for his happy experience on Arrested Development. “There’s a unique trust with Mitch,” he says. He almost always goes to the dub stage (uncommon for a TV composer) to participate in the final assembly of each episode. “We fool around with it a lot,” he says. “We can move every cue sometimes, and Mitch will add twice as many. He has this musical photographical memory—like he’ll remember, ‘What about this cue we did when Steve Holt is walking into the high school? What if we put two bars of that in front of that?’

“I think of the dub stage as a final musical process. It always makes it better. To Mitch’s credit, very often he’ll look over at me and say, ‘You don’t like that, do you?’ And I’ll say, ‘No,’ and he’ll revert. He trusts us. I have this tremendous freedom while I’m creating. I pretty much accept it’s going to go through changes later on, but I like that process too—especially if I’m there.”

The same trust and freedom have continued in the new Netflix season, which brought its own challenges: longer episodes (and thus longer cues), tighter deadlines, and seven years of personal aesthetic evolution. “I think it was hard for everyone on the show who had worked on the original,” Schwartz admits, “to go back to that place. We’re trying to go back, but trying to get it to a new level and get better.”

“I think it’s really just scene by scene,” he says about the general approach. “‘How can we make this better?’ And better is usually funnier. Mitch is always thinking, ‘What’s the joke here, and what are we trying to play?’” There’s a scene in the new season where it appears GOB is on the phone with his father, and the music plays to their relationship. Ten minutes later we find out he was actually talking to his son, Steve Holt, and the music reverses itself. “It’s just Mitch’s mind that does that,” Schwartz says.

“It’s been an unbelievably fun, fantastic experience,” he says. “Exhausting at times. We all work really hard, but they’re really nice and really good people, and we’re always laughing. So even if we’re working 14-hour days, it just feels good. There’s something great about Arrested. There are other wacky comedies, but Arrested just has a warmth to it. Through all the crazy humor, and as terrible as all the people can be, they somehow keep their likableness.”

The miraculous, 15-episode fourth season of Arrested Development will be available on Netflix and Netflix Instant on Sunday, May 26, at 12:01am PST.