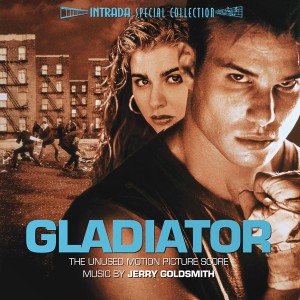 There’s a joke among us film score nerds about the “cult of Goldsmith,” people who worship at the altar of Jerry and think the late composer could do no wrong. I recently admitted to my affection for the zany, doo-wop fueled I.Q. (whose primary theme is “Twinkle Twinkle Little Star”), so I’ve clearly imbibed the kool-aid. That’s not altogether true, but in the last decade my admiration for Goldsmith has more or less raised his pedestal to the same rarified heights I once reserved only for John Williams. I’ve spent enough time in Jerry’s musical mind to know his gestures, his personality, his tendencies, and I must say it’s a lot like being in love. He almost can do no wrong.

Enter Gladiator, the forgotten 1992 urban boxing movie starring a junior Cuba Gooding Jr. and Twin Peaks airhead James Marshall. Goldsmith’s score for the film was tossed out on the streets like a no good bum, after it was already written and recorded. Who knows why—often score rejections are just last-ditch efforts to save a bleeding movie—but thankfully Intrada has rescued the score for Goldsmithaholics like myself. It’s a short score, written around a soundtrack full of songs, and it smacks of the early ’90s with its drum machine percussion and synth voices. It’s loud and proud and a little hokey…and it is simply wonderful.

When I first heard the score a few years ago (back when it was only available on the black market), I described it as “if The Russia House and Hoosiers had a baby.” That’s a weird compliment, to be sure, but it is a compliment. It has a lot of the same bluesy, noir atmosphere as its mother Russia House (one of my favorite Goldsmith scores), spotlighting jazzy solo piano and inhabiting a world of sonic shadows, sneaking between slight chromatic steps. Here that sound is often adapted to the pugilistic, urban setting with added drum beats and electric bass.

Gladiator‘s love theme is also a first cousin of Russia House‘s, a pining, climbing melody over a chromatically descending bass line. It’s a theme Jerry explored in variation in another rejected score, 2 Days in the Valley, but this version is superior.

The paternal Hoosiers DNA reveals itself in the sporting elements. Jerry takes the two-step, noir idea and has the brass punch it over a raucous synth and drum time clock. Hoosiers had its bouncing basketball percussion—Gladiator has a more traditional drumset and various synth effects in the same role—as well as a slamming, rapid four-beat figure like four swift jabs at a speed bag. Most of the score’s boxing scenes have a dark, fierce tone, but a jubilant, victorious string and brass theme emerges in the final rounds that would sit comfortably alongside a match with Coach Dale and his Hickory boys.

It took me a while to fall in love with Hoosiers: its dated synth wardrobe was my biggest hangup. But eventually I was sucked in by its joy and unflagging energy, and in the end the synth voices were as fundamental to its appeal as the melodies and more traditional orchestration. Maybe it’s because I’m so smitten with The Russia House and Hoosiers that I can’t help but love their odd little orphaned lovechild, Gladiator. The antiquated instrumental qualities don’t phase me in the least, and like Hoosiers they are central to the score’s bouncy, youthful enthusiasm. In its short, packed run Gladiator is chock full of prime Goldsmith melody, mood, and energy. I gladly, voluntarily let it knock me out.