The other notable inspiration to be found in Lion King is an appropriately grand, tragic, and spiritual score by one of Zimmer’s idols: Ennio Morricone. “In the original version of Mufasa’s ghost we used The Mission,” said Minkoff. “It was so powerful. We used a bunch of The Mission in our temp, and it was so good there was actually a conversation about whether or not we could buy the rights to it—which, of course, would have been a weird idea. It would not have been a good idea…

“We kind of said, ‘Hans, what are you gonna do?’ And obviously he’s a fan of Morricone, so that was okay. Except, I’ll tell you, the score for that scene is not as powerful as the temp. It was so good, and so simple. It builds in this amazing way, so that when Mufasa’s ghost comes to life in the scene, it so perfectly describes the emotional core of the scene, and it builds and builds to this amazing moment.”

Anyone familiar with Morricone’s Oscar-nominated score will hear a slightly inverted variation on one of its primary themes in that scene (an idea used throughout The Lion King to underscore Mufasa’s relationship with Simba). “But nobody knows that,” Minkoff said mischievously, “because it’s a secret.”

Remember Who You Are

One of the unique qualities of Zimmer’s score is that, unlike in the string of Disney animated films scored by Alan Menken that preceded The Lion King, he barely acknowledges the songs. Not until the recent release of the “Legacy Collection” expanded score album could you really hear the brief, instrumental cameos of “Be Prepared” or “Can You Feel the Love Tonight” in the underscore in scenes with their affiliated characters.

Hyenas In The Pride Land

“It was Hans’ choice,” said Minkoff. “I certainly would have advocated [incorporating the song melodies]—I probably did. That’s how you marry the score. But at the same time, Hans had really nothing to do with those songs.”

“I think in the case of The Lion King, it really worked to our advantage the way we did it,” said Mancina. “Number one, it was a very small group that worked on the music. And number two, we didn’t try to do what Alan Menken and Howard Ashman could do, because we could never come close to that. So we did something different, and we were lucky enough to survive. Tim Rice is a great lyricist, and Elton wrote great songs, so we had a lot of advantages. If we would have taken those songs into real showtune land, we would have been trying to do what Alan Menken is so great at, and I think we would have failed miserably. I think that’s one of the reasons it worked: it was a fresh change of an animated film, with a little bit of a different direction, musically, and I think people really liked that.” 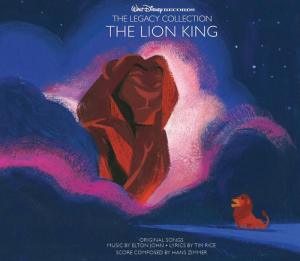 “What we managed to do on Lion King was, in a way, very spontaneous, and very collaborative,” added Minkoff. “It was slightly more freewheeling than the other movies, partly because Howard and Alan weren’t around to tell us exactly how to do it. We sort of all had to make it up ourselves.”

Not only is Zimmer’s music not grounded in John’s song melodies. It’s a serious, dramatic score that—with the exception of a few Timon and Pumbaa -fueled moments of comic relief—treats the film with an absolutely mature respect. His anguished music adds to the gut-punch of Mufasa’s death and Simba’s grief, and billows into a profound spiritual experience as adult Simba communes with his father and comes to terms with a lifetime of guilt.

The heavy emotions in Zimmer’s score, mingled with moments of lightness and romantic tenderness, endow The Lion King with a gravity and majesty few animated films possess. It’s no wonder it prompted his first (and thus far only) Academy Award. (John and Rice also won an Oscar for the song “Can You Feel the Love Tonight.”)

“Hans Zimmer made it gel,” said Minkoff. “Music is so powerful and is such an important element in the experience of watching a movie. You make a film, and you’re spending a lot of time without any music. And then suddenly you put music on it and you’re like, ‘Oh my god, this is good!’ Like, up until then it felt terrible: ‘this doesn’t work at all!’ And suddenly you’ve got music, and you’re like, ‘It all came back!’ It’s easy to fall in love in that sense.”

What made The Lion King great was “the combined sum total of everything,” said Minkoff. “You can’t really unwind it. You could do it differently, but it’s not gonna be better—just different. It was a very, very good, creative environment, in which there was a lot of experimentation and a lot of things that, in retrospect or in hindsight, we may not have thought of or would have thought of differently.”

“It’s done more good for me than anything,” he said. “People still love the movie. It’s kind of amazing that the stage show is super popular, so it’s kept it all kind of present. It doesn’t really feel like it’s 20 years ago. And it’s aging well. I don’t know how long that will last, but it’s aging well, which is fantastic.”

Thanks to Rob Minkoff and Mark Mancina for their invaluable contributions to this essay.